You could have knocked me over with a feather…

You could have knocked me over with a feather…

I have been one of the biggest supporters of English sparkling wine ever since two crazy Americans purchased Nyetimber in the mid-1980s and stubbornly demonstrated the viticultural potential of this island to a bunch of over-cautious English farmers who were reluctant to shrug off their all-weather safety-net of German crosses and French hybrids.

However, I am also a realist and the inescapable truth is that the world class quality of English sparkling wine has been created by a very small number of producers. There are perhaps only eight English vineyards responsible for the publicity that has been generated, of which two or three stand out as a class apart. The good news is that there are approximately eight more that have also produced some excellent sparkling wines, albeit not as consistently, thus they have the potential to step up, while there are another eight or so very interesting ventures waiting in the wings.

Going into The Champagne & Sparkling Wine World Championships 2014, I had every confidence that English sparkling wines would pick up a few gold and silver medals, but never in a month of Sundays did I seriously contemplate that one of them might actually waltz off with a World Champion trophy by style. We knew there would be a World Champion trophy for the best English sparkling wine, but when the Best in Class from every origin competed for a trophy in each style, I was convinced that Champagne would sweep the board (with the exception, of course, of the Aromatic and Red categories). How wrong could I be?

With all the best English sparkling wine producers entering the competition, 11 Gold (and 14 Silver) medals was a healthy, but not unexpected, haul. I could have predicted half of these, but not the rest. That is the beauty of blind tasting: you might think you know which is best, but until you taste wines together totally blind, you can never be sure. One of the surprises was Plumpton Estate. To be brutally honest I thought their wines were more Bronze level and perhaps occasionally Silver, but Gold? Unlikely. And two Golds? Never! It’s a little embarrassing because we judged at Plumpton College, but that was genuinely the result under blind conditions, and it was a great parting shot for ex-Nyetimber lecturer-winemaker Peter Morgan to retire on. He has raised the reputation of Plumpton College, which is necessary if it is to attract English-speaking future sparkling winemakers from around the world, but it was by no means the biggest surprise in into The Champagne & Sparkling Wine World Championships 2014. The full list of Gold medal winners:

The Best in Class of English Sparkling Wine

Within each category of origin, the wines were assessed strictly by style (Blanc de Blancs, Rosé etc.). Where no gold medals were awarded, no wine of that style could progress any further in the competition, but where there were gold medal winners, we grouped them together, demoted any that did not stand shoulder-to-shoulder with the rest, and chose the Best in Class:

I was surprised that neither Henners, nor Camel Valley did not win any Best in Class, but there is no denying the quality of Digby and Hattingley, which pipped them at the post. It did not surprise me, however, that Nyetimber won two Best in Class awards. Nyetimber sets the benchmark that others have to live up to. Sometimes they do (Camel has historically done so, and Henners has been thrusting forward over the last year or so), but Nyetimber is still best across the board, even if being best gets harder with each new rising star that appears on the rapidly evolving English sparkling wine scene. I’m sure that Nyetimber’s Canadian-born winemaking duo, Cherie Spriggs and her husband Brad Greatrix, are the first to agree that this is a good thing: the more serious players there are, the harder they push each other, and the better that English sparkling wine as a whole becomes.

There is also a Nyetimber connection to two of the other three Best in Class, as former Nyetimber winemaker Dermot Sugrue moved on to establish Wiston Estate and happens to be the consultant winemaker for Digby Fine English.

In fact, one of the two biggest English sparkling wine surprises of the competition was that Digby Fine English picked up the World Champion English Sparkling Wine trophy. I was surprised for two reasons. Firstly because I have followed Dermot Sugrue since he first appeared at Nyetimber and I was so pleased when he established Wiston Estate for Harry & Pip Goring. Last year I tasted my way through every one of his wines, including pre-releases that had yet to hit the shelf, and although I was more than satisfied with many of these wines, I reckoned that Silver would be the highest he might win. It is amazing what an extra year can do, whether on yeast or post-disgorgement or, indeed, a bit of both. A year ago I found the entire Wiston Estate range to be crisp and fresh, but rather straight-laced and ungiving, but the NV Blanc de Blancs has evolved into a lovely purity of fruit, with yeast-complexed fruit of exceptional freshness and elegance. As for the Digby, it is an amazingly sleek, seriously complex sparkling wine of the highest order, which brings me to the second reason I was surprised … very few people had heard of Digby Fine English and nobody would have tipped it for a medal and certainly not a Best in Class, let alone the World Champion English Sparkling Wine trophy.

This sparkling wine is named after Sir Kenelm Digby, a colourful 17th century pirate and philosopher, who was also involved in the elaboration of strong glass bottles. Owned by Trevor Clough and Jason Humphries, this is the first English sparkling wine to achieve such a high level of critical success using the equivalent business model of what the champenois call a négociant-manipulant or, possibly, négociant-distributeur, depending on your view-point. Digby sources its grapes from privately owned vineyard in Kent, Sussex and Hampshire, and they are pressed and vinified by Dermot Sugrue at Wiston Estate in Sussex. The success of this venture could see it copied by others.

The second big English sparkling wine surprise of The Champagne & Sparkling Wine World Championships 2014 was Hattingley Valley 2011 Rosé. At first it might seem odd that the Hattingley won a World Champion trophy by style, but the Digby, which beat Hattingley to the top English sparkling wine award, did not. However, each Best in Class has its own, completely different set of opponents. All the style categories were hard fought and the Vintage Blend (Digby) and Vintage Rosé were two of the very toughest fights. Digby was edged out in the final taste-off (as indeed were other stunning Vintage Blends), but Hattingley won through despite some very serious competition. Its pale peach colour immediately appealed, while its elegant and delicate aromas of fresh apricots – unusual for a rosé – stood out. It is a very seductive wine, with fresh, zesty fruit floating on a fine, silky mousse, tapering to a long with a nicely balanced finish that does not appear too sweet.

Hattingley’s owner, Simon Robinson, had always told Emma Rice, his bright, young, Über-talented winemaker, not to make a rosé. Apparently he did not consider rosé to be a serious wine, which was very champenois of him. Then in 2011 a trade customer asked him why Hattingley did not have a rosé, pointing out how popular the style was and the premium it commanded. In all innocence (we are told), Simon asked Emma why she had not made one, conveniently forgetting that it was his strict instruction. So she made this rosé, but with most of the 2011 grapes pressed and fermenting away, she was only able to make a relatively small amount. The secret of this rosé is the Pinot Noir Précoce, which, as its name suggests, ripens earlier than other Pinots. In the English climate, it ripens several weeks before most Pinot Noir clones and gives plenty of colour with heaps of fresh red fruit. Amongst the finished wines, some Pinot Noir Précoce had been fermented and had a considerable amount of colour. However, it was such a small volume that the amount of white Meunier and Pinot Noir wine that could be added without removing all the colour was extremely limited, thus only 2,000 bottles were produced. 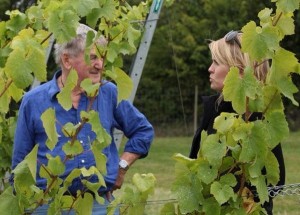 On 31 August, Hugh Johnson was one of several VIP guests at The Savoy Grill for a special dinner to preview of 13 World Champion trophy winners accompany. The Hattingley 2011 Rosé was one of his favourites. The next day he Tweeted: “Rice Surprise: just found star winemaker @hattingleywines is my former Atlas/PWB editor Emma Rice” Photo courtesy of Redjohnson@me.com