Why Lambrusco bottled it!

Why Lambrusco bottled it!

There are a number of different Lambrusco appellations in Italy and most are located in the lush valley vineyards of Emilia-Romagna, where we find the DOCs (or DOPs as they tend to label them these days) of Grasparossa di Castelvetro, Modena, Reggiano, Salamino di Santa Croce and Sorbara, with just one in neighbouring Lombardia (Mantovano). Until this tasting I thought the best Lambrusco come from Sorbara and the best of those was Chiarli Fondatore, but not any more …

I was not the only one holding this opinion. Sorbara has long been considered the best Lambrusco region, with the most elegant expression, and Chiarli is the very first Lambrusco house, dating back to 1860. Fondatore is its link to the past, when Cleto Chiarli would add partially fermented juice to his Lambrusco just before bottling it. As indicated on the label, Chiarli Fondatore undergoes “Fermentato in Bottiglia” and at one time it was one of the few Lambrusco to be produced in this way. Was it hubris that encouraged me to pronounce a bottle-fermented Lambrusco superior to all that lowly stuff churned out by cuve close? Did I imagine fermentation in bottle to be intrinsically superior for all styles of sparkling wine? Maybe, but that is definitely not true. We all learn and it has been a long time since I have had either the urge or opportunity to study Lambrusco in depth (more than 15 years), so this was a lesson that has been very late in coming.

Having said that, it has long been evident that some styles, notably aromatic ones, are better suited to cuve close. Even so, Chiarli Fondatore used to be much better than it is now. It never had much colour, and its clairet appearance was always off-putting, but it always used to have a fresh, enticing aroma and an elegance of fruit that made it stand out from the rest. Now it is just dull and lifeless. Nothing technically wrong, just nothing there …

It is not as if Chiarli itself has gone downhill. Cleto Chiarli Pruno Nero is the second best Lambrusco I have tasted in many a year, but that is a full-throttle, deep-coloured semisecco produced by cuve close. However, the days of Chiarli Fondatore being in a class of its own have long gone.

There is no getting away from it, Lambrusco has a lousy global reputation and from the results of my tasting, it is a reputation that is well deserved. When I approached the various Lambrusco consorzi, I was totally honest and promised to be supportive if I could find wines of a sufficiently high standard. However, when faced with just 30 Lambrusco, it was clearly not representative of the entire industry, yet the conundrum was that no consorzio is allowed to give any individual members preferential treatment. The smartest consorzi usually manage to get around this by including the very best wines within a large representative range, but with just 30 Lambrusco and well aware that I needed to taste the very best, the only logical assumption I could draw was that it must be chock-a-block full of top Lambrusco from the most serious producers. If this was true, then only six or 20% worthy of recommendation merely served to confirm the truth of Lambrusco’s poor reputation, especially when the rest were so dire and fault-ridden, but I think it was more of a hotchpotch that was compiled in haste. Even so, to find so few good wines is still depressing. Not withstanding this, it did shift my view that Sorbara and Chiarli Fondatore were respectively the best Lambrusco DOC and wine because clearly that honour now goes to Castelvetro and Corte Manzini’s L’Acino.

The low esteem in which so many wine drinkers hold Lambrusco is the primary driving force behind the fairly recent emergence of Metodo Ancestrale. Some are disgorged, but most are not, and there are two schools of thought about how the undisgorged version of this bottle-fermented Lambrusco should be served: one is to gently shake the bottle before pouring it, while the other is to let the spent yeast lees settle and pour it clear. I’m of the opinion that the first option is fine for some beers, but removes all elegance from any sparkling wine.

Unfortunately, this is pretty much academic as the Lambrusco Metodo Ancestrale I tasted did not have any elegance in the first place. If Lambrusco is to survive in the modern world, the fresher, fruitier, more vibrant cuve close wines should dominate, even at the top end of its price category. It was the poor reputation of Lambrusco that attracted the more widespread of Metodo Ancestrale, as its bottle-fermentation production method demands a higher price. Unfortunately so many Metodo Ancestrale stank and were so disgusting that higher prices can only be counter-productive, making consumers think that Lambrusco is not only poor in quality, but also overpriced.

The reforms required to achieve this go right back to basics, including the need to replant vineyards at much higher densities and to reduce yields. Forget all the faults and how to correct those, major viticultural shortcomings were evident in the fruit of all the technically correct, but qualitatively lacking wines I tasted. There are, however, lots of smaller, yet equally as important tweaks that must also be addressed:

The Tasting
I was deeply disappointed not to have tasted a greater number of Lambrusco and, more importantly, not to have found more Lambrusco I can enthusiastically recommend, but these six do at least demonstrate that delicious Lambrusco can be found. If all Lambrusco wines were as good as Corte Manzini Lambrusco Grasparossa di Castelvetro L’Acino, Lambrusco could be serious competition to Prosecco in the bars of swinging Europe. 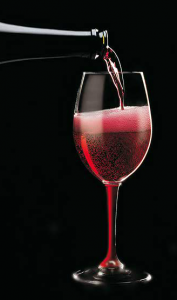 Cà Berti Robusco Semisecco
Lambrusco Grasparossa di Castelvetro DOP
85% Lambrusco Grasparossa & 15% Malbo Gentile, Cuve Close, 12%, 20g/l
This non-vintage is in fact 2013, but although a year older, it is just as fresh, fruity and full of energy, with vibrant, purple foam.

Cleto Chiarli Pruno Nero
Lambrusco di Modena DOP
50% Lambrusco Grasparossa & 50% Lambrusco Salamino, Cuve Close, 10.50%, 20g/l
A lovely, deep, summer-fruit colour with a purple, foaming mousse, this Lambrusco is fresh and rich with tangy cherry and cranberry fruit on the palate, and the residual sugar is so well balanced that it does not taste sweet per se, just rich. This is a lovely dry and lively Lambrusco with a twist in its tail in the form of raspberry-rippled chocolaty fruit on the finish. The second-best wine in the tasting and definitely a potential Silver medal.

Cleto Chiarli Vecchia Modena “Premium” Mention Honorable
Lambrusco di Sorbara DOP
100% Lambrusco di Sorbara, Cuve Close, 11%, 8g/l
Unlike the light-red Fondatore, this Lambrusco is meant to be a rosé and has an elegant, pale-peach colour. Despite its old-fashioned presentation, the style is modern, with a very fresh, clean, fruity style and notes of cherry, cranberry and raspberry on the aftertaste. Essentially dry.