A Tale of Two Bottles

A Tale of Two Bottles

It was a cosy little tasting in the private cinema of The Soho Hotel with Régis Camus last night. The raison d’être was, of course, the UK launch of Rare Rosé 2007, which proved to be truly something special, but that was not all we were treated to. We tasted five different cuvées, each paired with food …

Piper Heidsieck Brut
50-55% Pinot Noir
30-35% Meunier
10-15% Chardonnay
(including 10-15% Réserve)
We kicked off with the entry level non-vintage and gosh how well it showed! Under Remy-Cointreau, the late, great Daniel Thibault developed a brighter, clearly fruit-driven style to keep its distance from the brut non-vintage of Charles Heidsieck, while at the same time shifting away from the more austere style of Piper under its previous owners, the d’Aulan family. Since Daniel’s untimely death, Régis has moved the Piper Brut style and quality closer to Charles, while stopping short of actively copying it by focusing more on Pinot Noir and Meunier, less on Chardonnay. It is now one of the most consistent, high quality, amazing value Champagnes on the market, with a delicious freshness of fruit and intense mellowness that makes chef de caves of other far more expensive Champagnes green with envy. It was a perfect match for the Parmesan risotto.

Piper-Heidsieck 2008 Brut
55% Pinot Noir
45% Chardonnay
The new Piper 2008 is due to be released in the UK in Q2 next year. This is as fantastic as the vintage itself. It is certainly the greatest vintage of the first decade of the new millennium and Piper is one of the best, with intense, knife-edge crispness of fruit and Piper’s hallmark spiciness. I just love it. Drinking gorgeously well now, it will only get better as the decades go by, if you have ideal storage conditions, so collectors should be ready to grab it while they can! 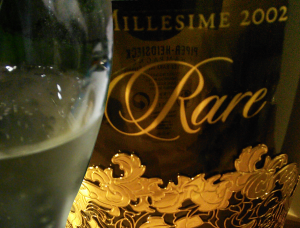 The only relative disappointment of the night was the normally super-consistent Rare 2002. This is the tale of two bottles and it was a pity because Rare 2002 is one of my favourite Champagnes of all time. I don’t think it had a fault as such, but for anyone who regularly drinks this wine the bottle we tasted on the night was marred by slightly aldehydic aromas. I am used to revelling in the majesty of this great wine and at the tasting it was just good, not majestic. It did not smell or taste “faulty” per se, just a matter of cork porosity I think. A tiny bit more oxygen ingress in this particular bottle than in all the others, and this led to the aldehydic aromas. As soon as I got home, I opened a bottle of Rare 2002, as readers can see here (Lot number 159907 4137), and it was perfect: so majestic, so smooth, so sumptuous. Decadent even. With absolutely no aldehydic aromas! Régis really should have opened a second bottle at the tasting because everyone should have gone away spellbound.

Piper-Heidsieck Essential Brut
50-55% Pinot Noir
30-35% Meunier
10-15% Chardonnay
(including 10-15% Réserve)
This is, essentially, the non-vintage Brut with an additional year on yeast and the one we tasted was (as the back-label revealed)the 2010-based blend with 13% reserve wines, bottled in May 2011, and disgorged December 2014 with a dosage of 6g. It is a minor miracle, as anyone who knows what the 2010 harvest in Champagne was like can testify. There are blends that are blighted by a small amount of 2010 used as a reserve wine, yet this is 87% 2010 and just so, so good. Anyone with 2008-based Essential in their cellars can forget about it for a decade or so, and it will will be mind-blowing. Readers might have picked up the odd bottle of Essential at duty free in UK airports, but it will be available in the UK itself as from Q2 2017, albeit restricted to the on-trade. The pairing here, with sweet & sour crispy pork was as good as it gets.

Piper-Heidsieck Rare Rosé 2007
56% Chardonnay
44% Pinot Noir
This is what we were all there for. The opportunity to taste the very first cuvée of Rare Rose, the Rare Rosé 2007. Just 150 bottles have been allocated to the UK (currently available at Harrods and Hedonism) and anyone who thinks that £325 is rather steep should be thankful that it is a top of the range cuvée from Champagne because if it had been a top of the range Burgundy, they could easily expect a four-figure price-tag and some can even demand five-figures! If you have deep enough pockets to buy Rare Rosé 2007, it is certainly an exciting Christmas present for the Champagne aficionado who has (almost) everything! It is really teeming with Pinot Noir aromas, showing great minerality and purity. Despite the majority of Chardonnay, this gorgeous cuvée is just so Pinot driven. The Chardonnay might play a more dominant role in the future, but currently it is in background mode, beautifully underpinning the Pinot fruit with its freshness and elegance. This is such a masterful display of selection and assemblage that I can imagine Daniel, Régis’s old mentor, looking down and smiling ….