I don’t normally reproduce a press-release, but for collectors out there with deep enough pockets, this treasure trove of DP is an absolute bargain … all 11 rare and very special bottles direct from the cellars for less than the cost of one bottle of Romanee Conti DRC 2005! Not that the DRC isn’t mind-boggling in its own right, but I will probably have to wait until I am dead before the 2005 reaches its peak, whereas every one of these DP gems is absolutely  now. The point is, however, that anyone who has DRC in their cellar will be able to pick up this haul of DP for small change … 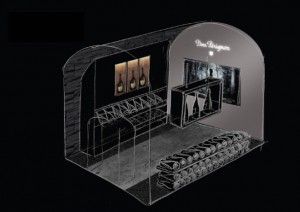 So with no further ado, no word of the press-release edited, and no apology:

The custom-created deluxe Dom Pérignon wine cellar, with its surrounds of dark wood and slate, will showcase 11 wines – from the Dom Pérignon P3-1959 to the Dom Pérignon P2-1996 – in lit niches, recessed into the walls.  These rare bottles can be purchased as a collection and will certainly be a perfect gift for any wine lover, a fabulous addition to one’s wine cellar or a magnificent wine to be enjoyed at a vertical tasting.

DP’s Chef de Cave Richard Geoffroy will host an exclusive tasting of the collection for prospective buyers on 20th October, and the Dom Pérignon treasure vault will be open to Hedonism customers from late September until the end of the year.

Mark Harvey, Marketing Manager Dom Pérignon, comments, “This really is an exceptional opportunity for Champagne connoisseurs to experience and purchase from this range of rare Dom Pérignon vintages.”

Chef de Cave Richard Geoffroy believes that Dom Pérignon matures in cycles.  It reaches its first peak of maturity, or plénitude, after at least seven years’ ageing on the lees.  (The exact amount of time will be decided by the characteristics of that year’s vintage.)  The second plénitude occurs after a minimum of 12 years’ lees maturation, and the third requires no less than 20 years.  This lees ageing is fundamental to Dom Pérignon’s singularity as it magnifies every character in the Champagne, protects it from oxidising and enriches it.

This unique collection, coming straight from the cellars of Dom Pérignon, will be available at London’s finest award-winning wine merchant Hedonism Wines ( 3-7 Davies Street, Mayfair, London W1K 3LD) at £16,495.00 (for all 11 bottles) and can be delivered to most countries overseas.

History buffs amongst the collectors might be interested to know that Hedonism also have what they claim to be a Dom Pérignon 1926, but there is no such thing! If you have a closer look at the label using Hedonism’s magnifier, you will see that there is no mention of the name Dom Pérignon on a label and bottle that in every other respect looks identical to DP. But this is no fake: this is pure history! This Champagne is one – possibly the sole survivor – of only 300 bottles that were specially shipped for Simon Brothers & Co’s Centenary (1835-1935) for its very best, well-heeled customers. When their rich American friends heard all about it, they demanded that Moët & Chandon should ship some to them too, which they did the in 1936, using the brand name of Dom Pérignon for the very first time and filling the iconic-shaped bottles with an older and even better vintage (1921) as an appeasement. So what Hedonism have is not DP, it is the historic precursor to DP. And although it sounds a little strange, this 1926 vintage was shipped one year before the 1921. As an added curiosity, Moët dit not even own the Dom Pérignon brand until 1927, when it was gifted by the Mercier family upon the marriage of Francine Durand-Mercier to Paul Chandon-Moët. I doubt the 1926 is drinkable, but for £18,650.70 the owner would be purchasing history and who can put a price on that?