How good is the new Joseph Perrier cuvée?

How good is the new Joseph Perrier cuvée?

Joseph Perrier Cuvée Royale Blanc de Noirs Vintage Brut Nature is the most exciting, most innovative Champagne this house has released in my lifetime. There are faults, but thankfully they are confined to its presentation and packaging, not the contents, the sheer quality of which had me spellbound from the start …

The problem is, however, that this is a single-vineyard Champagne from the lieu dit of La Côte à Bras in Cumières and this not insignificant point is missing from both the bottle and its carton. Since no other wine region has elevated assemblage (the art of blending) to such heights, presumably will always be a point to be made whenever anyone deviates from this tradition, yet on this occasion the consumer is left in the dark. 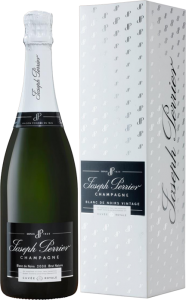 In the case of any single vineyard Champagne, the name and location of its lieu-dit is of fundamental importance. In this specific case, it is more important than either “Blanc de Noirs” or “Brut Nature” and both of those are more important than “Cuvée Royale”. Obviously it should be Joseph Perrier Cumières La Côte à Bras Blanc de Noirs Vintage Brut Nature. The “Cuvée Royale” tag is an unnecessary distraction. It is ridiculously out of date, referring to a Royal Warrant that was conferred on this house by Victoria and Edward VII. If JP wants to keep “Cuvée Royale” labelling alive for historic reasons, then why not restrict its use to those Champagnes that were sold a century ago: the regular non-vintage and vintage? This would be more appropriate, more focused and allow Joseph Perrier’s more exclusive cuvées to stand out.

Hopefully anyone who buys this Champagne without realising that it is from a single vineyard does not scrunch up and throw away the tissue paper wrapped around the bottle because it bears the only reference to the origin of this very special Champagne, a beautiful reproduction of a 19th century map showing La Côte à Bras and its surrounding lieux-dits. 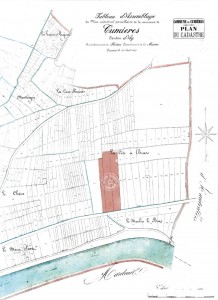 Cumières is not just any premier cru (there are no less than 42 villages in Champagne classified as premiers crus), but one of a clutch of truly superior premiers crus overlooking the Marne in the immediate vicinity of Epernay. These are all on the northern bank, thus mostly south-facing, with vines planted on a pure chalk subsoil with a high active lime content. The central section of La Côte à Bras lieu-dit (indicated in red below) in Cumières was brought into the Joseph Perrier domain by Paul Pithois, who purchased the house from Gabriel Perrier in 1888 (Jean-Claude Fourmon, the nephew of Pithois’s grandson Georges, has been chairman for the last 35 years).

At one time the vines would have all been Meunier, but Joseph Perrier’s plot has been totally replanted with Pinot Noir. I remember some lovely Coteaux Champenois Rouge produced by Joseph Perrier from these vines in the 1980s. It was just the leftovers from the red wine produced to colour the Champagne rosé, but better than most of the Bouzy available at the time. Denois (who has since flitted to Limoux via half the vineyards in the world) used to produce a single-vineyard Champagne rosé from neighbouring vines called Cuvée des Côtes-à-Bras. There are lots of single vineyard Champagnes today, but it was such a novelty then and so affordable, that I used to buy the odd case just before returning home from trips in the mid-1980s. Richard Geoffroy also uses grapes from this lieu-dit for Dom Pérignon Rosé. The vines in La Côte à Bras therefore have a track-record that would indicate plenty of potential, but I have never had a blanc de noirs from here and 2008 would be the last vintage I would choose for brut nature. If it is a typical 2008, this high-acid, extraordinarily low-pH (2.98) vintage should be too lean for the brut nature style. In my mind’s eye it would be all bone and no meat, yet it is not: it is an absolutely classic brut nature. Perhaps it has something to do with the special character of the 2008 Pinot Noir, which has the most intense, individual quality I have seen from this variety since 1985.

If there is any concern over the quality of Joseph Perrier Cumières La Côte à Bras Blanc de Noirs 2008 Brut Nature it is its potential longevity. Given a dosage of, say, six grams, I could easily imagine it ageing gracefully over 50 years or more if not moved from its cellars of production, and 20 years or more if held under good cellarage conditions elsewhere. However, with no dosage whatsoever, no one should risk keeping it longer than 12 months. Enjoy it now, while it is at its best. I will! I might lay some down for experimental purposes, but I wont rely on any of those bottles. Besides, I want to drink it while it is still packed with that intense 2008 Pinot Noir fruit. It is so vibrant and vital in the mouth. Such an unforgettable experience.