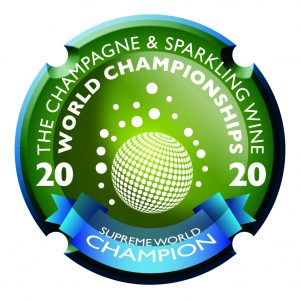 Corks have been popping all over the world this weekend as the Champagne & Sparkling Wine World Championships hosted its Virtual Awards Week (7th-11th December) announcing a total of 37 trophies to the greatest sparkling wine producers from around the globe.

The week kicked off announcing the Best in Class winners followed by the virtual audience being able to discover the 13 Regional Champions, 12 National Champions and finishing the week off with the announcement of 9 World Champions, the Tony Jordan Rising Star Award and the Chairman’s Trophy.

For the first time since the competition began, the World Champion trophy awards had never been so close with Best in Class winners from around the world batting it out to be crowned with a CSWWC trophy. In the end it was Louis Roederer that was finally crowned Supreme World Champion for the Louis Roederer Cristal 2004 Rosé in Magnum. The Chairman’s Trophy, this year went to Midalidare Estate and The Tony Jordan Rising Star Trophy went to Portuguese sparkling wine producer Provam.

Founder and head judge Tom Stevenson went on to say “This year was always going to be memorable for obvious reasons, yet, despite the global pandemic, we attracted a record-breaking number of entries. Every year the standard of Champagnes and sparkling wines entered gets better and better. The bar was set high from day one and the Trophy count certainly reflects this. However, it is not only our mission to promote world class wines, but also to discover and reward new and exciting wines from established and emerging regions across the world, so I was particularly pleased to present Provam from Portugal with the Tony Jordan Rising Star trophy this year. Winning this trophy in addition to the Portuguese national trophy illustrates the potential of fully sparkling Vinho Verde.”

All the results can be found on our website under Results Tab.